The Savage Blue (The Vicious Deep)


But I didn't account for the small knife strapped to his bicep. Kurt holds the knife by the hilt. He raises it over his head, flicks his wrist back and forth. He wouldn't. As my guardian, he's in charge of making sure I don't meet an untimely death. But he does. 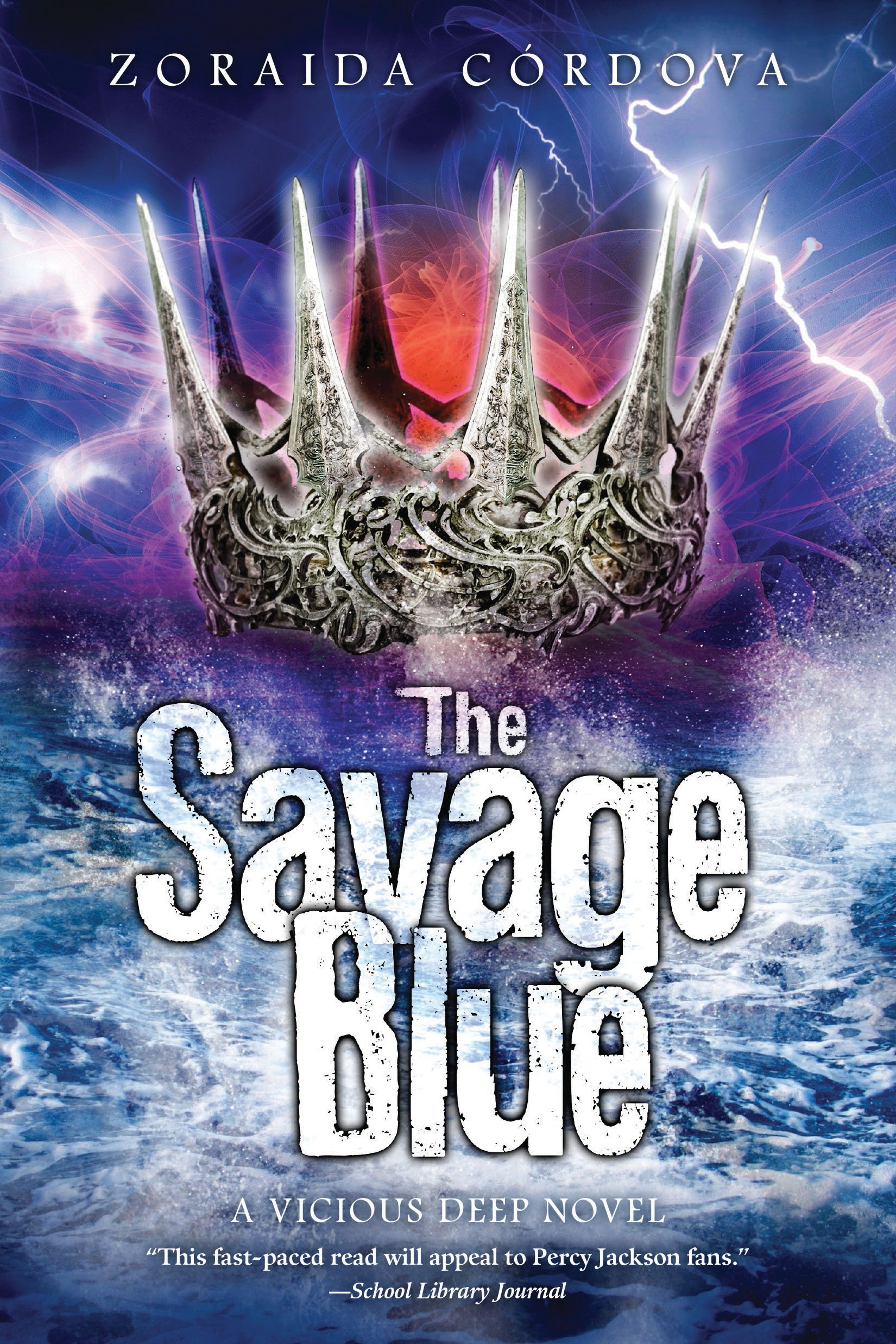 I dive to the left. My back hits the ship hard, and I let the current pull me away. His deep chuckle lingers in the rustle of water. He takes hold of my ladder and hoists himself back up onto the ship, which is getting farther away. My muscles burn with every breaststroke, every kick. Then the dolphin returns, and I realize that being the grandson of the Sea King comes with some perks. His big black eye gleams at me, and I wonder why dolphins always look like they're smiling. I grab hold of his dorsal fin. In seconds, we're caught up with the ship. I pat him on his back and grab hold of the ladder.

Halfway up, I see Kurt's knife an inch deep into the wood. When I pull it out, there isn't much resistance. I break the surface and my gills shut against the wind. My body feels a hundred pounds lighter. The blisters on my soles pop and bleed with every step until I'm over the rail and planted on the deck. I strip off my T-shirt and toss it to the side.


I brush my wet hair from my eyes and spot Layla and Gwen leaning on the railing of the quarterdeck. All they need is a tub of popcorn, and it'd be just like being at the circus. Layla's biting her nails down to stubs. She runs her hands through the mess of her thick brown hair, which is growing bigger and bigger with the rising heat. Her hazel eyes flick between Kurt and me. He's holding his knees and breathing hard. He quickly adjusts the sheath at his hip.

Great, he's got his sword back. I pick up my sword off the deck. I say that last one didn't count. I hear the wet smack of Kurt's feet racing.

Without a word, it's still game on. Kurt drags the tip of his sword along the floor. With his middle finger, he lightly taps the center of his forehead, something he does every time we fight. I never ask and he never explains what it means. It reminds me of going to church with Layla and her Catholic father. They do something similar-the father, the son, and the something spirit. I have no secret messages to tap like Morse code on my face like they do. I'm not exactly sure what I believe in anymore, now that I know monsters are real and good people die in the blink of an eye.

I raise my sword just in time to meet his and growl, "I wasn't ready. I don't care if you're ready.

I block, block, block, moving two steps backward with every blow. Sure, merrows don't care if you're ready or not. They come out of the shadows and attack, the way they attacked us in the football field of my school and at Ryan's house Friday night Too late, the thought of Ryan, my friend, dead on the ground, makes me miss a beat, and Kurt's sword comes a hair away from my face. I wipe sweat and seawater from my cheek, and a long stripe of red comes away with it. All of his movements, from the eye roll to the way he turns his dagger like the right angles of a clock, are uptight.

His face is ferocious, shoulders hunched like a predator. Collected their teeth and dipped them in gold to decorate his armor. The sun is in my eye and the rail of the ship digs into my lower back. I'm running on pure adrenaline. It's a rush no swim meet has ever given me.

It's got to be a record. When he was on land, he never smiled this much. I can't let him get to me. It's like when Coach Bellini swims alongside us during practice, shouting, "You call that swimming?

I met a turtle in Vietnam that was faster than you! But my grandfather chose me. That's got to count for something. Doesn't it?

And then there's Kurt, King of the Show-Offs, who does some ballerina shit across the deck. I push hard, metal banging on metal. I hit his solar plexus and he braces, trying to regain his breath. He switches arms. Every five strikes, he switches arms to not tire one over the other.

That creates the gap I need to strike. I make my blow count, aiming where I know it will hurt Kurt the most. The swipe is painfully accurate, and a lock of his precious hair falls to the deck. His brow trembles, giving way to the first drip of sweat from his too-tight pores. I'm about to say, "Don't worry, it'll grow back," but he raises his blade with a deep grunt and charges at me until I find myself stuck between Kurt and the edge of the ship once again.

Note: Don't mess with a merman's full head of hair. It's the reaction I want-careless, reckless, thoughtless. Until we're stuck in a mirror image with my sword at his throat and his at mine. My heart is pounding, partly because I can't believe I did it. Partly because Kurt digs the edge of his sword into my throat some more. Neither of us stands down. It takes all of me, and I mean years of discipline, to not shout, "Yeah, in your face! This is how grown-up mermen fight. I bow back to him, accepting his defeat but keeping my eyes on him at all times. The clapping above us breaks our warrior trance.

Kurt blinks into the blinding sun beating through the sails.

I flip the small knife in the air, catch it on its blade, and hand it back to him. He grunts a short "Thanks. Arion, the captain of our ship, hovers over us. He's a merman just like Kurt and me, but he's royally bound to the vessel. Enchanted black vines twine around his wrists and his tail. The black and silver fins lick at the empty air beneath him.

The binding stretches all over the ship, allowing him to go as far as the topmast, but never into the sea. A punishment carried over from father to son. I reach up and shake his hand. I can tell he doesn't say this easily. Kurt takes one step closer. Whatever he's going to say is interrupted by blue and purple blurs.

It's the urchin brothers, pulling sails and tying ropes to create a little bit of shade. When they stop running around, you can see their true shapes. Their almond-shaped eyes are big and black, like their gums, which freaked me out when Blue woke me up this morning. True to their name, the urchin brothers have spiky heads that are surprisingly soft to the touch. Note: Don't mess with an urchin's head of hair, either. The food they've spread out on silver platters, tarnished from being stored below deck, is decadent.

Dried salmon skin, pink stuff that jiggles without touching it, and whole calamari jerky that looks like Buddha hands coming to get you. There's caviar in the brightest colors on top of crunchy dried seaweed. Steamed seaweed. I really enjoyed the style and actionBy emmalinesueA strong followup to book 1! I really enjoyed the style and action. Perfect for a crowd that loves Percy Jackson type books. The viscous deep, the first book of the series, was better than this.

Though this one. Now he must lead the rest on a dangerous voyage in search of the trident that will make him king. But while Tristan chases his destiny, the dark forces raging against him are getting stronger, and the sea witch of his nightmares is getting closer. Battling pirates, sea dragons, and mutant creatures of the deep, Tristan needs his friends' support. But they each have their secrets, and a betrayal will force Tristan to choose between loyalty and ambition, friendship and love.

In the race for a throne, all's fair in the savage blue. From BooklistThere are only six days and seven nights before the duel in Toliss, when one of four finalists will be crowned King of the Sea.